WASHINGTON, EU(EFE). - The Venezuelan opposition pedira today to theO.A.S. that takes part against the propose constitutional reform bypresident Hugo Chavez because, in his opinion, violates Inter-Americanthe Democratica Letter, segun one of its leaders. Representatives offour opposition parties, headed by Manuel Rosales, today made therequest in one reunion to 19,30 GMT with the Secretary General of theOrganizacion de American Estados (O.A.S.), Jose Miguel Insulza. Duringthe interview they gave a document to him that explains the impact ofthe reform in Inter-American the Democratica Letter and denounces thepersecution to the "dissidence" and Rosales in individual, said to Efea member of the Venezuelan delegation. The leader pidio not to beidentified because the parties have decided that Rosales is theofficial spokesman of the group. "In the case of the reform, theO.A.S. must take party, because she is opposite to the Inter-AmericanLetter", I emphasize the source. Ademas de Rosales the leaders of aNew Time Luis Emilio Rondon, Timoteo Zambrano and Delsa Solorzano, theSecretary General of Divided Copei Popular, Flat Luis Ignacio, themember of Cause R Andres Velasquez and the representative of theMovement to Insipid the Nicolas Socialism compose the group. 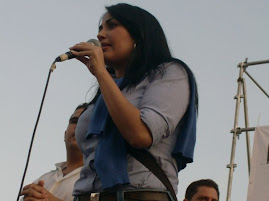